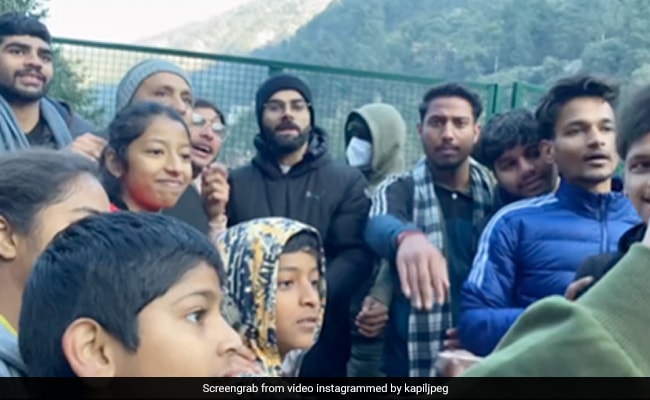 The former Indian cricket captain was also seen surrounded by the locals as he interacted with them.

Virat Kohli is regarded as an idol among cricket enthusiasts who take their love of the sport very seriously. His fans have made numerous efforts in the past to meet him – some travelled to the country he was playing in while others waited for the ace cricketer in his hotel lobby for long hours. But, in an unusual tale, a fan in Uttarakhand met the cricketer outside a temple when he recently took a vacation with his wife Anushka Sharma and daughter Vamika.

A video shared on Instagram by user Kapil shows how he, along with his friends, left around 6am on their bikes to meet the cricketer. According to the video, the group received information that Kohli was visiting the famous Khainchi Dham temple at Almora road close to Nainital. The super text in the video reads, “We reached there we had no clue, we were asking locals about Virat’s visit and everyone was telling us different stories. Some said he is inside the temple. Someone said that they came at 5am so we decided to wait until 10am.” Finally, he was able to meet and take a selfie with Kohli after a long wait. The former Indian cricket captain was also seen surrounded by the locals as he interacted with them. The cricketer also asked people to not click pictures or videos of his daughter who was resting in the car.

The caption of the video reads, “The day I met @virat.kohli @anushkasharma. 17.11.22.” Since being shared on Instagram, the clip has amassed over 3.1 million views and 4.5 lakh likes. Sharing a similar experience, one user commented, “I remember I met virat on 13 march 2021 at lucknow airport.. Though I purchased tickets for match but match cancelled due to covid… I was so upset but my father make arrangements by talking someone at airport authority and finally I got the chance to meet whole team India and never forget that day..”

“Dude how does virat kohli keeps his calm…the most aggressive player in field and also the coolest off the field. we are lucky to have him in our team,” said another user.

“Dream for many of us,” said a third.

“OMG, being a very big fan i can totally understand your feelings! congratulations bro, age kabhi pata chale to hame bhi batana (please let us know if you get to know about anything like this in the future),” commented a fourth.

Another person added, “You are very luckyyyyy.”

Elon Musk Briefly Became The 2nd Richest Person In The World. No. 1 Was…