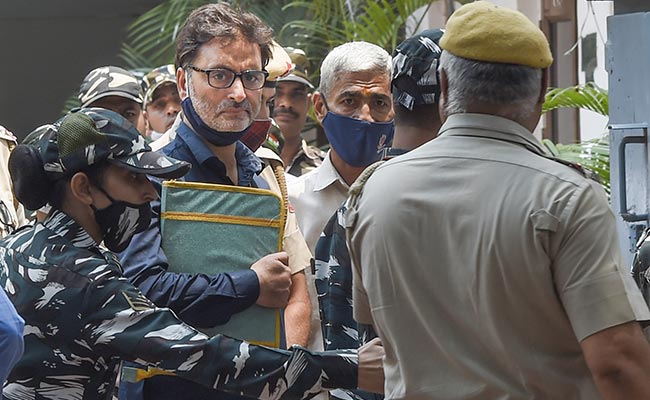 Malik is lodged in Tihar Jail after he was sentenced by a special NIA court in May.

Malik, who is lodged in Delhi’s Tihar Jail in a terror financing case, was not produced in the court physically due to a Ministry of Home Affairs order restricting his movement.

Senior Public Prosecutor S K Bhat told reporters, “Today, accused Yasin Malik participated in the trial through videoconferencing…and did not oppose cross-examining the witness.” “I made a submission before the court as a CBI representative that production warrant should not be issued as he participated in the trial. Court accepted that and no production warrant was issued,” he said.

The court asked the Central Bureau of Investigation (CBI) to produce the rest of the witnesses on the next date of hearing on December 23.

Rubaiya did not appear for the hearing, as her exemption application had earlier been approved by the court.

Bhat said two witnesses were scheduled to record their statements in the court. While one of them, a retired doctor, was present in the court, the other was in Saudi Arabia and could not join the trial, he said.

Another witness’ exemption application was approved by the court as he was reported to be undergoing dialysis, he said.

The retired doctor’s statement was recorded in the court in the presence of Yasin Malik, he said.

Bhat said that Malik seeking his physical appearance in the court was a ploy to delay the trial. “Due to security reasons, it is not feasible to produce him here,” he said.

During the last hearing on July 15, Rubaiya had identified five accused, including Malik. Rubaiya was abducted from near Lal Ded Hospital on December 8, 1989. She was freed five days later after the then VP Singh government, supported by the BJP, released five terrorists in exchange.

Now living in Tamil Nadu, Rubaiya is listed as a prosecution witness by the CBI, which took over the case in early 1990.

Malik, 56, is lodged in Tihar Jail after he was sentenced by a special National Investigation Agency (NIA) court in May. He was arrested in early 2019 in connection with the 2017 terror financing case registered by the NIA.

Malik had observed a 10-day hunger strike from July 22 after the Centre did not respond to his plea to physically appear in the Jammu court hearing in the abduction case.

Three Of Family Killed In Road Accident In Jammu and Kashmir