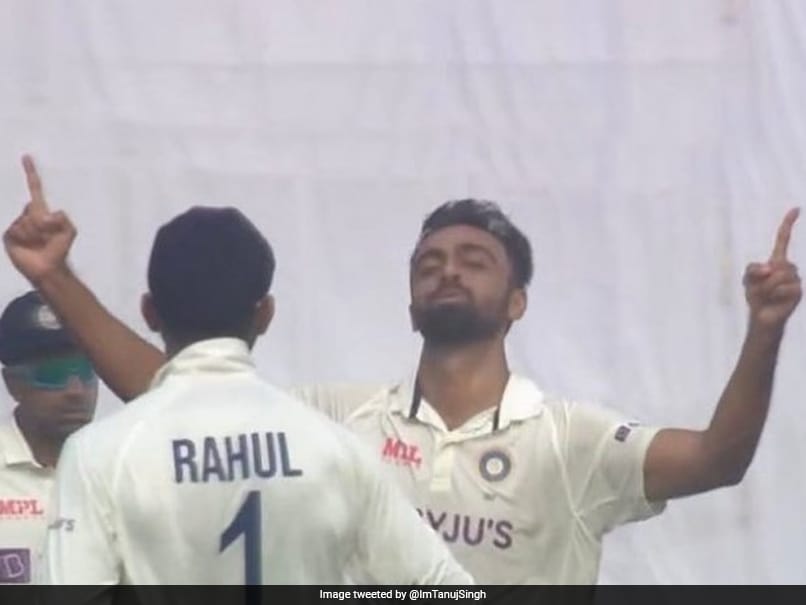 Jaydev Unadkat provided India the breakthrough in the 15th over.© Twitter

Making his Test comeback after more than 12 years, veteran pacer Jaydev Unadkat finally picked up his maiden wicket in the format on Thursday. Notably, Unadkat had gone wicketless on his Test debut, which came way back in December 2010 against South Africa in Centurion. In the ongoing second Test against Bangladesh, Unadkat made his comeback into the side, replacing the in-form Kuldeep Yadav, who had taken eight wickets in the first Test, including a five-wicket haul in the first innings. After Bangladesh opted to bat in Mirpur, Unadkat gave India the first breakthrough in the 15th over.

Unadkat tasted success on the fifth delivery of the 15th over when he bowled a short of length ball outside off stump but the extra bounce completely surprised Zakir, who ballooned one straight to KL Rahul at fourth slip while shaping for a cut.

It was an emotional moment for Unadkat, who for long had been ignored for selection, despite his performances in the domestic circuit.

In between his first and second Test appearance, Unadkat missed 118 matches, the highest by an Indian and the second highest in world cricket.

Bangladesh were 82 for two at lunch on the opening day, with Unadkat and Ravichandran Aswhin taking a wicket each.

At the break, skipper Shakib Al Hasan was batting on 16, while Mominul Haque was unbeaten on 23.

India lead the two-match series 1-0, having won the first game in Chattogram.

“Football In Argentina Is A Passion”: Argentinian Envoy To NDTV

Pele – Legend, Enigma And The Best-Loved Football Star Ever

Pele, Diego Maradona, Lionel Messi: Who Is The Greatest Of All Time?

Pele, One Of The Finest Exponents Of The 'Beautiful Game', Dies Aged 82