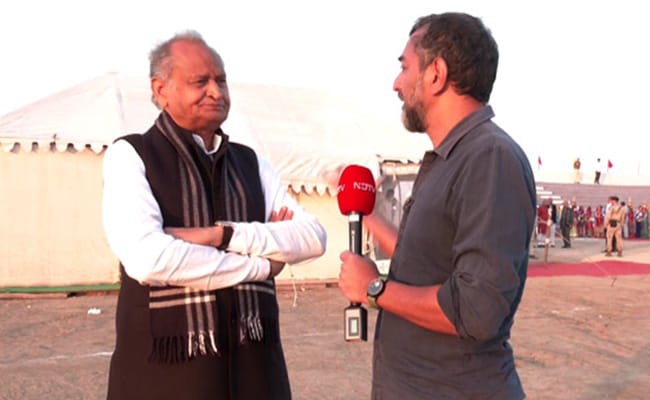 Sachin Pilot should have apologised for his 2020 revolt and because he didn’t, he can’t be accepted as Chief Minister by Rajasthan Congress MLAs, Ashok Gehlot said in an explosive interview to NDTV.

Describing his former deputy repeatedly as a “gaddar (traitor)”, Mr Gehlot, 71, said if Sachin Pilot had apologised to Rajasthan MLAs and won them over, it would have been different.

“Till now he has not apologised. If he had apologised, I would not have had to apologise,” Mr Gehlot said, referring to his conversation with Sonia Gandhi after more than 90 MLAs close to him defied the party on choosing his replacement to enable his shift to Delhi as Congress president.

The MLAs had refused to attend a party meeting in September, weeks before the Congress president election, and had declared they would not accept Sachin Pilot as Chief Minister and that whoever became Congress president (ie Mr Gehlot) should have the final vote.

The rebellion that was clearly backed by Mr Gehlot deeply embarrassed the Congress party at a time Rahul Gandhi’s “Bharat Jodo Yatra” was well under way. The Rajasthan Chief Minister reportedly apologised to Sonia Gandhi in Delhi before exiting the Congress president race.

“The MLAs were not loyal to the Chief Minister (me),” Mr Gehlot said on the rebellion, “They were loyal to the High Command.”

Mr Gehlot said the MLAs resented Mr Pilot for his 2020 revolt, during which he camped in Delhi for days with 19 MLAs, building pressure on the party to do right by him.

Mr Pilot met in Delhi with two senior union ministers at the time, Mr Gehlot alleged in his interview. “Amit Shah and Dharmendra Pradhan was also involved in it. All had a meeting in Delhi,” he said, without backing his claim, alleging that among MLAs supporting Mr Pilot, “some got 5 crores, some 10. In fact, the money was picked up from the BJP office in Delhi.”

Though Mr Pilot lost both his posts – Deputy Chief Minister and Rajasthan Congress chief – Mr Gehlot said an apology was in order and that never came.

Mr Gehlot said the September revolt by MLAs was “a revolt against Pilot” and many ministers said they would “not accept a gaddar“.

“Make one of the 102 who were loyal (in 2020) the Chief Minister. There is no problem. But the man who did gaddari, how will our MLAs accept him?”

Mr Gehlot said he apologised to Sonia Gandhi as it was his moral responsibility. “Because I’m Chief Minister. I’m the leader of the legislative party. Despite me, they did not agree to come to the meeting. That was not a revolt, it was their loyalty for the High Command, it was just anger.”