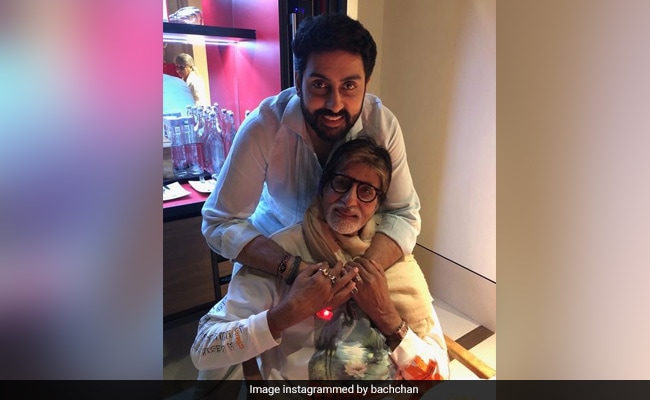 The Filmfare OTT Awards were held in Mumbai last night and Abhishek Bachchan  won big. The actor, who starred in two OTT releases this year – Dasvi and Breathe: Into The Shadows 2, won the Best Actor trophy for his performance in the former. His movie Dasvi also won the Best Film Award. A proud Amitabh Bachchan shared a special tweet congratulating his son. Abhishek Bachchan often finds himself on the brutal end of trolling. Big B, in his tweet, addressed that and added that Abhishek Bachchan has managed to prove his point with his performance in the film and the accolade that he recieved. “My pride…my joy… You have proved your point .. you were derided , ridiculed mocked… but you silently without any tom tomming, showed your mettle…You are and shall ever be the best,” tweeted Big B.

T 4503 – My pride .. my joy .. you have proved your point .. you were derided , ridiculed mocked .. but you silently without any tom tomming , showed your mettle .. you are and shall ever be the BEST .. pic.twitter.com/SaJFGrtABp

Dasvi showcases the story of a CM locked in a prison, who finds himself lost in the land of alphabets as he tries to complete his class X exams. During his stay in the jail, he meets a tough cop (played by Yami Gautam), while Nimrat Kaur stars as Abhishek Bachchan’s power-hungry wife, who becomes the CM after Abhishek is locked up.

Directed by Tushar Jalota and produced by Dinesh Vijan under the banner Maddock Films and Jio Studios, Dasvi the film released on Netflix earlier this year.

In terms of work, Abhishek Bachchan was last seen in the second season of Amazon Prime Video’s Breathe: Into The Shadows . He will also star in Ghoomer, for which he began shooting on his birthday this year.