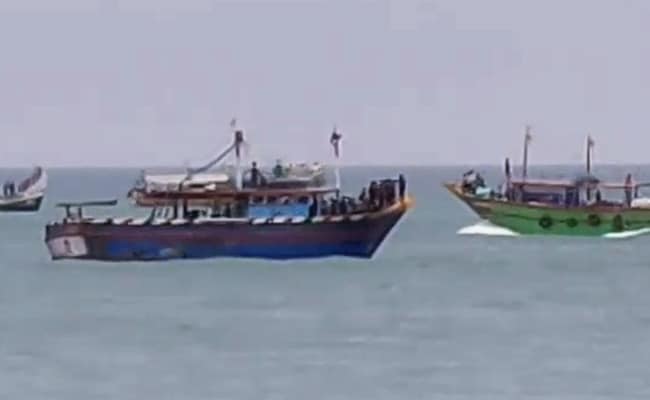 Sri Lanka Navy has arrested 14 Indian fishermen and a trawler for allegedly poaching in Sri Lankan waters, an official statement said on Thursday.

The Navy said they were arrested off the coast of Vettilaikerni in the northern Jaffna district on Wednesday.

“Sri Lanka Navy has stepped up its patrols and operations in Sri Lanka’s waters to curb illegal fishing practices of fishing trawlers”, the Navy said.

A report from Rameswaram in Tamil Nadu said that an Indian fisherman, identified as Johnson, sustained injuries to his eye after being allegedly attacked by the Sri Lankan Navy during the operation.

The Navy said that a total of 228 Indian fishermen and 30 trawlers had been seized so far this year.

Illegal fishing in the Sri Lankan waters by Indian fishermen has been a recurrent problem despite many high-level talks held between the two sides.

The fishermen issue is a contentious one in the ties between India and Sri Lanka, with the Lankan Navy personnel even firing at Indian fishermen in the Palk Strait and seizing their boats in several alleged incidents of illegally entering Sri Lankan’s territorial waters.

The Palk Strait, which is a narrow strip of water separating Tamil Nadu from Sri Lanka, is a rich fishing ground for fishermen from both countries.

There have been periodic instances of Indian fishermen being apprehended by Sri Lankan authorities for allegedly crossing the International Maritime Boundary Line and fishing in Sri Lankan waters.

Video: Maharashtra Girl Jumps Out Of Auto To Escape Harassment